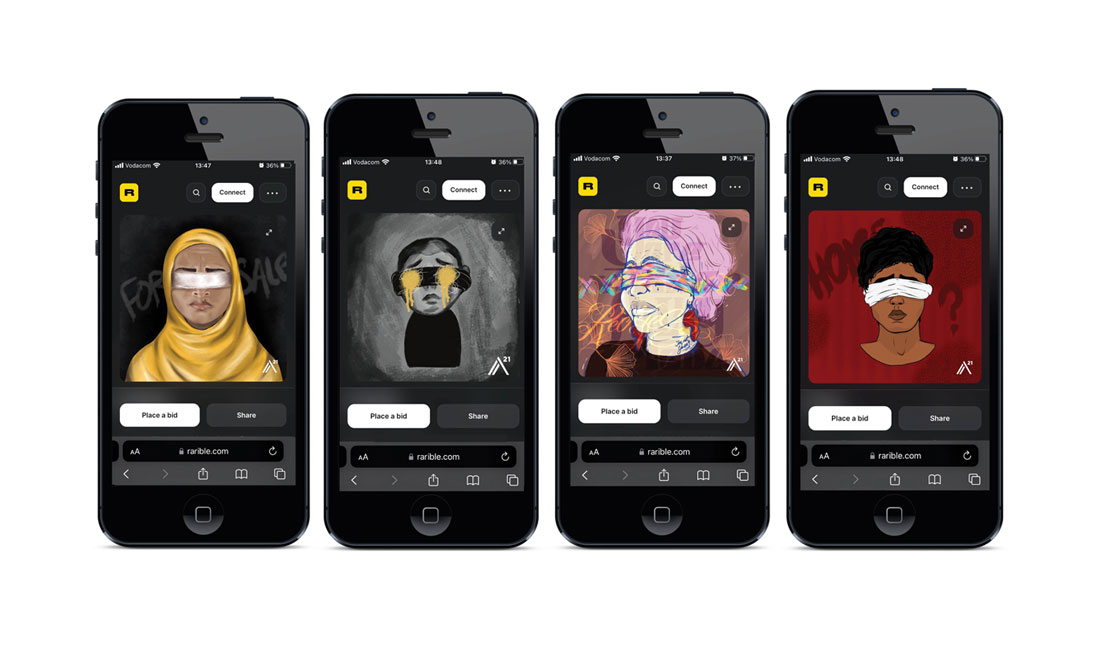 Breaking the chains of human trafficking

Unbeknown to many, over 150 000 people per year are being trafficked and sold in South Africa alone. The mere thought that a loved one could become a victim of human trafficking has been an unavoidable dark alley for many in the fight to end trafficking. However, as the A21 Chief Advocate, Christine Caine put it, “No one person can do everything but every one of us can do something”.

Throughout marketing history, evidence suggests working together for a common cause has a positive impact on society, and we couldn’t miss out on the opportunity to work with A21 in their fight to end human trafficking and slavery across the globe.

Under the guidance of our Creative Group Head, Meagan Viljoen, and a team comprising of Jamie Moss, Michael Coetzer, Jesse Sharkie, Sukesh Moodaley, Caitlin Morgan, Nande Gubevu, Jean du Toit and Asiphumeze Nkula created a campaign that is currently live on Ethereum’s Rarible as an NFT collection called The Unownable Series, contributing to the fight against human trafficking.

The impact that campaigns that fight for human rights have made is immense. As marketers and advertisers, the relevance of culturally relevant insights makes a huge difference in changing the world. The Unownable Series provides the immense potential to go beyond lip service and make a real impact in the fight against human trafficking. Will you join?

What the campaign deals with

The campaign features a limited edition NFT series of unique stories and individuals on Rarible. It explains how many people are trafficked each year, how it takes place and what A21 is doing to combat human trafficking. The images are not for sale but rather the payment serves as a donation to the fight against human trafficking.

It also includes a social media element to direct people to the Rarible site to view the images and donate. Although it is only an image of a person, we saw this as an opportunity to send a hard-hitting message about the harrowing truth of human trafficking.

To create the biggest impact possible, the campaign incorporates a series of digital audio stories to capture the tragedy and horrifying moments that led to human trafficking. We hope through the social media campaign and its presence on Rarible we can raise funds for A21 as well as bring awareness about trafficking operations.

However, people are wising up to the rising number of missing people and the threat of human trafficking around them; There is a misconception that it is taxing to do your bit, but there is a way and here is how.

What you can do

In the words of our Creative Group Head, Meagan Viljoen, the worlds current fascination with the blockchain, the technology that enables the NFTs phenomenon, could help us break human trafficking.

The Unownable Series will be up for ‘bid’ for an extended period following which artists worldwide will be approached to make their contribution by creating their own Unownable characters. This transaction will be a donation to A21 to help end the theft of human lives.

To support The Unownable Series, donors will need to purchase Ethereum on Luno, upload it to their Metmask accounts and place bids on Rarible using the following link https://rarible.com/theunownableseries.

Visit https://rarible.com/theunownableseries/sale to play your role in ending human trafficking